I have a belly ache. And a problem:

I happen to have an evening to myself and what do I do? I get my kitchen scale out and start weighing flour, sugar, oil, etc. I turn my oven on for the fourth straight day in a row in the middle of a blistery hot summer. Why do I do these things?

Because after my last post about making the perfect vanilla cupcake, I ate a leftover one today and I was disappointed. The flavor was great. The moistness was good. But the crumb...that darn crumb...was too big for my liking (too big of airy holes). I wanted a fine-textured crumb. At least finer than what I previously made.

Don't get me wrong: the other cupcakes are still good basic cupcakes. But I wanted better. Time to stop guessing and experimenting and attaining pretty good results. Time to get out the calculator, do some basic math and ratio calculations and finally put this baking experiment to a rest. Time for "better than perfection." My tummy needed it: soooo much tasting. And re-tasting. 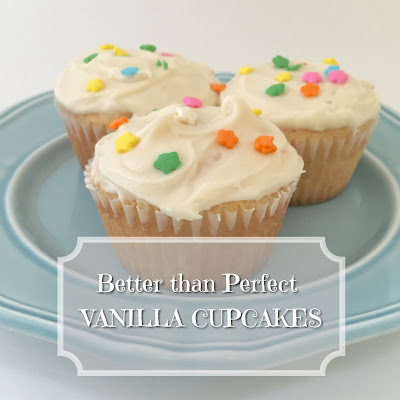 Here is what I knew I wanted for this recipe:

1. It had to be easy. I didn't want a "The Joy of Cooking" choose-your-own adventure baking process of dirtying a billion dishes and performing a zillion steps before finally putting the batter in the oven. I want to mix it up in a few steps with a couple dishes and move on with my life.

2. It had to be quick. Refer above to the "Joy of cooking" analogy. I wanted to be able to pull out ingredients that are pretty mainstream, that require no additional cooking or heating or taking temperatures, etc. I just wanted to be able to throw it together quickly. Because that's the beauty of a boxed cake mix: it goes together super-quick. But I want something from scratch that goes together just as quick.

3. I knew I wanted to use oil instead of butter for a couple of reasons. Number 2 above (being quick) was a big factor. I didn't want to have to take butter out of my fridge and either leave it on the counter long enough to get to that elusive stage of being somewhat softened, but still cool. Leave it out too long in my kitchen and I'll have a greasy buttery mess. And I can try to put it in the microwave on 30 percent power or something, but I still end up melting part of it, which can be fatal to a baking recipe. **update: I tried this recipe with melted butter and it tastes good, but is a little more dry than just using the oil.

My second reason for wanting to use oil is because it usually makes a more moist cupcake. And I was going for moist.

4. Really fine (small) and tender crumb. That's the reason I kept baking: to get a finer crumb. I prefer this texture and mouth-feel.


5. It has to taste good. Obviously. Isn't that why I bake? But they all (the gazillion batches of cupcakes I made) tasted good. I'm kinda tired of the taste of vanilla cupcakes, or any kind of cupcake. Or baked good. Or sugar. Yesterday my brother asked me in all seriousness if I was depressed after I turned down a cookie at his house. Ha ha ha ha. No, I just am sick of baked goods. Don't worry, it won't last too long. It never does.

So, I had to follow some basic cupcake and cake ratios to make my cake. Baking is a science, and you have to stay within certain parameters of ratios of ingredients without straying too far, or your recipe will fail. You can still get creative, but you have to follow the basic rules. So what are the basic rules of making a butter or oil cake? (which is the kind of cupcake I was wanting to make--as it has the texture and crumb I was going for). If you don't want to know about the rules, feel free to skip down to the recipe. You may not care how I got there.

RULES FOR CREATING A CAKE RECIPE:

1. The weight of your sugar and the weight of the flour have to be roughly equal. The sugar can weigh a little more, but it has to be close. And this is by weight, hence me getting out my digital kitchen scale for this.

Sugar is not just for sweetness, but it is also a tenderizer. So not having enough can make your cake tough. And having too much might cause your cake to fall or not set up.

I started my recipe with the sugar. I decided to start with 1 cup of sugar to base all the other ingredients off of that. I weighed the sugar. One cup of my sugar was 7.8 oz. That meant that my flour needed to be around that. So I weighed flour and found that with my cake flour, 1 2/3 cup was 7.6 oz. Pretty darn close. So now I had my flour measurement. More flour than that would make the cake dry and tough.

2. The eggs and the fat should weigh roughly the same (or the eggs slightly more than the fat).
I knew my recipe needed at least one egg, and I also wanted to use the yolk from another egg. Egg whites tend to dry out baked goods, and remember I am aiming for moist. So after weighing an egg plus a yolk together, I knew I needed the same weight in oil. I  measured the oil to figure that out. Whole eggs are about 1.75 oz, and a yolk is about 0.66 oz for anyone who wants to go through this process for themselves.

And that gave me all the measurements for a basic vanilla cupcake that would come out right. Now, within these rules is a little wiggle room (about 20% of so) for you to experiment with. Getting too far away from these ratios will be trouble. But I wanted to experiment with more moist and finer crumb. So I adjusted some things again for the result I was aiming for (I guess more experimenting was somewhat inevitable).

The method for how you mix the cake is quite important for texture too. I grew up using the "creaming method" (where you cream the fat with the sugar first). This is good if you want your cake to rise tall. But there is a different method, called the "two-stage mixing method," which is better for tenderness, and bonus: it's simple. So that's what I chose.

And now, I'm done with the recipe for vanilla cupcakes. At least this month! :)

1. Preheat the oven to 350 degrees F. Prepare your cupcake/muffin trays with either placing cupcake liners in them, or grease with vegetable oil.

2. In a stand-mixer (or large bowl if you don't have a stand mixer) combine all the dry ingredients: sugar, cake flour, baking powder, and salt. With paddle attachment (or whisk by hand) mix on low speed for about 30 seconds to evenly distribute all of the ingredients. 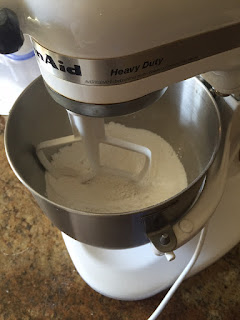 3. Measure out oil in measuring cup and add the eggs/yolk and vanilla. Whisk together. Add 2 Tbsp. of the milk to this mix and stir.

4. Add the egg/oil mixture to the dry ingredients and mix on low speed until moistened. Then increase speed to medium and mix for 2 minutes, stopping to scrape down the bowl at least once in the middle. 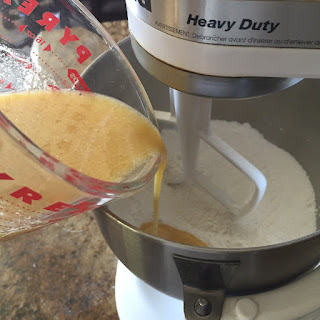 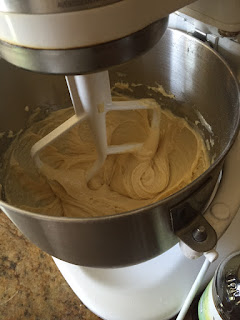 5. With the mixer on low, add the remaining milk (the 1/2 cup minus the 2 Tbsp) in two additions, allowing to mix about 20 seconds after each addition (until the mixture is combined).


6. Scoop batter (I use a large cookie scoop for this) into prepared muffin tins, filling each cup about 2/3 full. Immediately place in your preheated oven and bake for 20 minutes, or until top is springy and toothpick comes out clean. Do not over-bake or they will be dry. 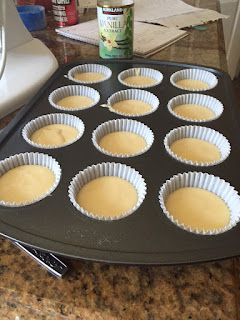 So there is my perfect (better than perfect apparently) vanilla cupcake recipe that I'll use forevermore! Yippee!

Posted by AHappyCarrot at 12:26 PM