I blame Instagram. And Pinterest. Now as usual, I'm late to the party. I always am. Instagram has been around forever, but it's only within the last few weeks that I've been using it.

Like when iPods first came out, I stated: "That's dumb. Who needs to carry all their music around with them wherever they go?" Ahem...sooooo...yeah, look what iPods spurred on. It took me a few years after that before I finally succumbed and bought my iPod nano. I was later than my mother to that party. And yeah, I saw the use for it eventually. Now we're on to many iGadgets later.

To enter that contest, I had to use social media and use a hashtag and everything. Which meant I had to start using Instagram.
And that has spurred my desire to try a little bit of everything.

Because entering that contest opened up to me a world of people who sew/create for little girls. Boutique owners, talented seamstresses, fabric designers, fabric manufacturers, sewing pattern designers...are all part of their own world. And I feel like an alien peeking in. I have looked at images of all these adorable dresses, fabrics, and patterns and I think: "Hey, I could try that for awhile."

So that's why in a matter of a few weeks, I will have made 4 dresses (2 more to come and add on Instagram before this ride is over) and a skirt for a two-year-old who doesn't need that many dresses....Because when I decide to do something, I go full throttle until I get burnt out. But not to worry when I get burnt out, because there are always more worlds to explore.

You can find the Easter dress pattern I used here: Made for Mermaids
and the vintage dress pattern I used here: Straight Grain
Sometimes I'm a voyeur of the quilting world. You can't call me a quilter, although I like to make quilts. But I'm not devoted solely to quilts, nor am I great at it. I like to make a stuffed rabbit one day, a doll the next, focus on some dresses for awhile, then quilts, then felt ornaments...and that's how it's going. You can't call me a seamstress, although I have recently been sewing up a storm of little girl clothes, because again, I'm not great at it, and it's not all I do.


And when I'm tired of creating stuff out of fabric and felt...I move on to the baking. I've got rolls rising as I type this. Mmmm. Because I finished a dress yesterday, and I'm taking a little break (and mostly was in the mood for rolls). But during nap time, watch out: I'll be making a doll for a friend's little girl. Because I'd rather do all of this than laundry. Or cleaning. Or organizing. And sometimes showering......

So there's a little insight into why this blog/me is all over the place. It's just my space to express something, and to avoid my responsibilities.

Spring Sewing is in the Air!

Yes, I know my last post was about pumpkin, which is traditionally a Fall thing. And I've been hand-sewing Christmas ornaments too, so I may be a little confused, but.....

Spring is on it's way!! Yippee!

Now, living in California, this doesn't have as much of an impact as when I used to live where it snowed. No matter what, when March came, even if there was snow on the ground, I would get excited. Because it meant that the short, dark, cold days were coming to an end. I no longer live in the snow, but I still love the end of Winter and I love that it's March.

Now that I have a new sewing hobby in my life, it also means that new Spring fabric lines are coming out, which is also kind of exciting. I get emails with alluring photographs of new colorful fabrics and beautiful projects made with them, and well...I succumbed to buying some bright Spring fabrics to try to make my own cute things.

One of my favorite fabric designers is Tamara Kate, and she came out with her new line called "Nature Walk." I love it. So I bought some. One of the fabrics is a panel of all of the letters of the alphabet, so that is fun. I decided to use the "e" and make my little bean a toddler messenger bag to take to preschool (which she just started and loves and calls "me-school").

I did something I haven't done before, either. I entered a sewing contest that Tamara Kate and Michael Miller fabrics was hosting. Eek. It ended yesterday. I don't think I'll win (they haven't announced yet) because there were some pretty amazing entries, but it was fun to try nonetheless. I was wanting to make a bag for the bean anyway, and the contest got me motivated.

I had to incorporate the Nature Walk ABC panel in some way, and use other fabrics from the line. So I entered my bean's little bag, which I designed myself. 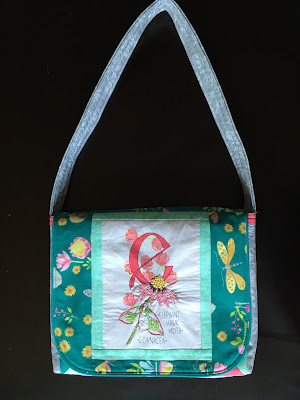 Here is what the panel looks like. Super cute! 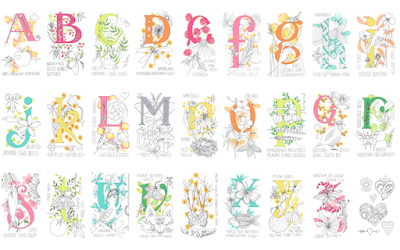 I pieced together the body of the bag with different fabrics from the Nature Walk line: 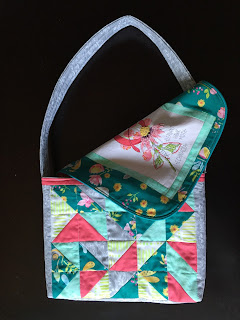 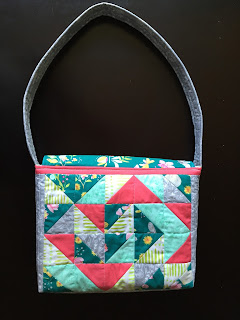 I love the colors of the fabrics. My only regret is I think I incorporated too much of the solid pink. I was able to work on my piecing skills again, and even my embroidery, as I embroidered the flower and moth. And the bag is also quilted ("in the ditch" mostly, with some decorative lines on the gray fabric).

Look at all those triangles. They give you a closer view of the fabrics, too. 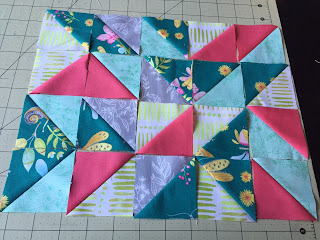 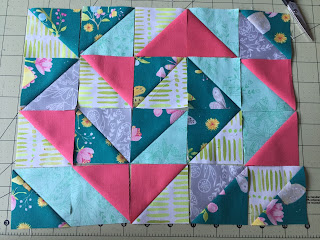 I added some turquoise piping to the flap of the bag. 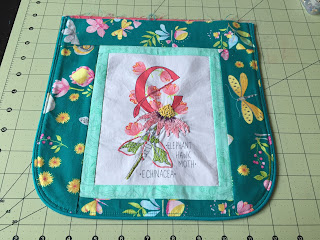 The center of the flower is embroidered with a bunch of french knots, and I filled in the petals of the flower with a gradient of 3 different colors. I didn't get as fancy with the moth...which by the way, did you know that elephant moths are bright pink and green? I did not. Until I did a little research before starting my embroidery. 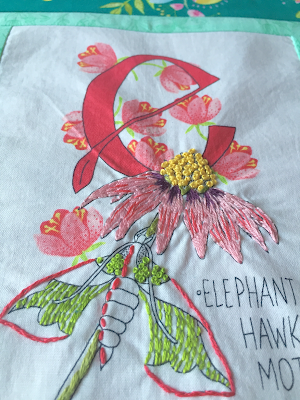 The inside of the bag is lined with the green and white fabric called "Tall Grass" which comes in different colors: 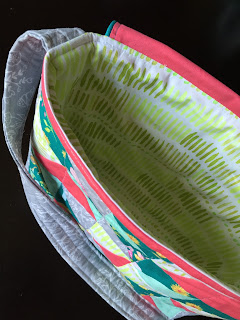 After I made the bag, I had almost the entire ABC panel left (since I only used the "e"). I used the rest of the panel to make a ruffled tiered skirt for the bean, too, which she wore proudly: 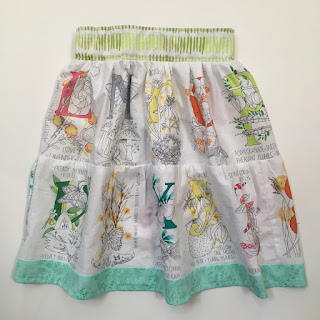 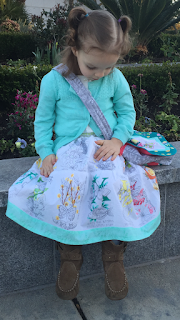 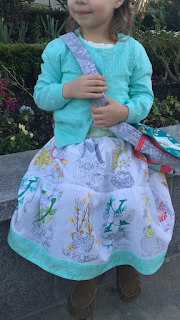 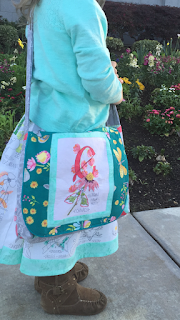 And then she was done with pictures. Photo session length: 5 minutes. Not bad for a two-year-old. She was less cranky than the 12-year olds who were along for the ride. 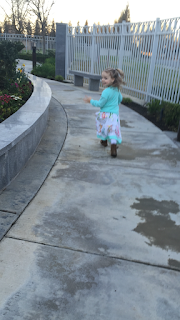 To make the skirt, I used the length of one row of letters (the width of fabric-45 inches) for the first tier (Each row of letters on the panel was 8 inches tall, so that is how tall I made the tiers), and I sewed a row and-a-half together for the second tier.

(I did the waist-band like this tutorial here, except mine was smaller--because I used the Bean's waist measurement-- and the width of my waist band was about 2 inches).

Then I added a trim of the light turqoise fabric on the bottom, about 2 1/2 inches long. I hemmed it and ta-da! Quick little skirt.

Now I can say that it feels like Spring!

Posted by AHappyCarrot at 2:52 PM No comments: