But when it comes to baking: who wants to turn on an oven when your AC is running full blast all day? And it's already as hot as an oven outside? So what do you do if you just gotta bake?

Well, you first ask your husband if he'd be willing to put some cookie dough on a cookie sheet and leave it on the dashboard of his car while he is at work. Just for an experiment, ya know. Cookies after work: yay! He doesn't seem too keen on that idea, though. So what's a baker to do?

You think: 'I live in one of the hottest places ever; there's gotta be a way to bake something with the sun.' So you google "solar ovens" and do some reading and looking at pictures. You get bored with all the talk of conduction, convection, and radiation. Then you pick a model (I chose the box cooker with some reflective panels) and get some supplies and hope for the best! 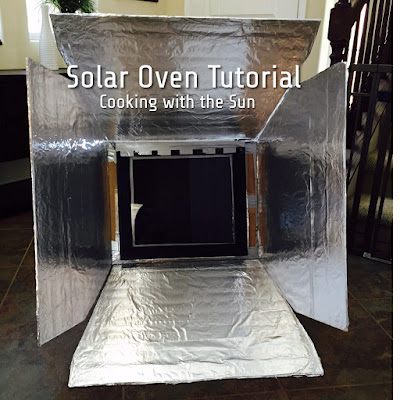 Now I don't pretend to be an expert on solar ovens, but this one worked great for me. It got hot enough in the late afternoon (after I made it) and baked up some good rolls. It took me about two hours to put together (while the little one was napping), and only required a few supplies.

Here is what I used:


Step 1: get your frame with glass.

You want to get the frame first as you will get boxes based on the size of your frame. I went to Goodwill (a thrift store) and for $5 picked up this beauty. Ha ha ha ha. I just needed the frame and the glass, not the scantily clad redhead with her bum doused in spirits and lit on fire. But I was amused. And I am a redhead. When I sent a pic of my find to my husband, he was worried that I was going to try to  hang it up somewhere in our home. Hee hee.

You can also use plastic wrap if you don't want to go through this step.


Step 2: get and set up your boxes

I went to Walmart and found some boxes that would work with the frame (meaning the frame would rest on top of the smaller one, so it has to be at least as big as the opening in the smaller box).

I set up the smaller box, taped the bottom and cut off the flaps (carefully with the utility knife) that would make up the top. Then with black foam board I found at the dollar store, I lined the inside (glued in the foam board). You can also paint it black and allow it to dry.

I completely set up the second box (meaning I taped up the top and bottom with nothing inside). Then I cut out a square hole (the size of the smaller box) in one of the sides of the larger box. I added some insulation (I used Christmas wrapping paper since I didn't have newspapers) in between the two boxes. I taped the boxes together on top with some more duct tape.

Then I took the sexy red-head out of her frame and taped the frame and glass on the box over the hole. 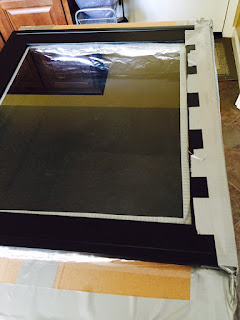 I taped the outside of the frame, and then taped it to the box from the inside as well. Here is where you don't want to have cheap duct tape. After being in the sun for about a half hour, the original duct tape I used melted off and I had to re-tape the frame/door on.
Step 4: make and attach the reflective panels.

I had 4 white foam boards from the dollar store. I measured the lengths of the frame and added an inch or so to the measurement. I used that number as the length of the base of the reflectors. Then I made sure they flared out from the base. Like the picture below. The top and bottom pieces are identical, and the sides are identical to each other.

Then I glued aluminum foil to the foam board. Then I taped three of the reflectors together (the top and sides) with clear packing tape on both sides, and taped them on the box. I attached the bottom panel to the box along the bottom, but not to the other side panels as I need it to move/adjust as I tilt the oven towards the sun.

Step 5: place your oven in the sun, angled so that it is directly in the line of the sun. Prop it up with something (like a food can or box or whatever). Prop it up underneath and behind (I didn't prop it up behind here and the wind knocked it over and my rising rolls got smooshed--sad).

During baking, you will have to rotate the oven every 30-45 minutes or so as the sun moves. Place the oven thermometer in the oven, and a small rack if wanted (I found a small rack at the dollar store).

The temperature was at 200 degrees Fahrenheit after only 15 minutes. It got up to 250 pretty quickly after that. Then the duct tape melted in the sun and the lid came off, and the temp went back down to 150 degrees. I taped it back on with better tape.

Then I put some little teeny bread loaves in there to test it. Do you see them rising in there? Awesome, huh?
The rolls took longer to bake than they would have in a regular oven, but that was fine with me because I didn't heat up my house.

Make sure you use oven mitts when touching this oven to rotate it or get the food out. It gets quite hot!

Next I'm going to experiment with brownies and cookies. And then maybe even a roast or something in a covered pot if I get brave.

So I would say the solar baking experiment was a success! Smooshed rolls and all.

My neighbor did think I was a little weird, though. She couldn't understand why I would want to do such a thing as make a solar oven and cook with it.
Why? Because look what a cool thing I just did! I combined my love of baking and making/crafting in one project. I baked bread without turning on my oven! In a solar oven I built all by myself (now I kind of sound like the Little Red Hen...). Without electricity and without gas. And now you can too.

Now where do I store this thing?

Posted by AHappyCarrot at 7:18 PM