making your own pattern for a soft toy (softie)

Making your own soft toys is not too difficult, and it is fun to see something that you created come to life. Not literally come to life (unless you’re a Toy Story believer of course), but something that came totally out of your own head coming to fruition can feel rewarding. Or….in the early stages, sometimes it can feel defeating. Drawing pattern pieces for your own softies is a trial and error, sometimes hit and miss experience. But with each new pattern, or tweak of a pattern, you learn something new.


I am going to show you the first pattern I ever made for a soft toy (a rag doll)……all so that you don’t feel too deflated if your toy doesn’t turn out how you imagine. I drew what I thought would be cute: a head, a face, a body shape and arms and legs. Here is the pattern I first drew on paper, and then glued to poster board and cut-out. I mistakenly thought that my first pattern would work out just as I imagined in my mind. Boy, was I wrong.

And here is the finished doll:

I know!!!!!!! Hideous!! I didn’t even bother to finish sewing her up. In fact, I thought I had thrown her away, but she showed up a little while back. Apparently my toddler found some redeeming qualities in this doll, because she still will carry her around and hug her at times. So currently this poor creature lives in the toy-box, and is pulled out pretty much daily: a constant reminder of where this process started.

For your own pattern making, all you need, basically, is a head pattern piece, a body piece, and limbs. If you’re drawing an animal, sometimes you might need ears, tail, or other body part. Look at images online (of animals if you’re making an animal), or doll faces that you might like. Or you can rummage through the recesses of your own creative mind. There are lots of ideas in there, I’m sure. The important part is that all of the pieces need to fit together. So the head piece needs to fit exactly to the top of the body piece, as they will be sewn together. So if the bottom of your head piece is 5 inches, the top of your body piece needs to be 5 inches.

You also want to draw in seam allowances. I have used mostly quarter inch seam allowances in making my soft toys. So in drawing a pattern piece, sometimes I will draw the shape that I like, and then draw ¼ inch line around that to account for the seam allowance, which will change the shape of your pattern some. Keep in mind that once a pattern is sewed and stuffed, it will be a different shape and size than the drawing on your paper. For example, I’ve found that if you want a round head on a doll, the pattern piece needs to be more of an oval shape, with the long part of the oval spanning across the cheeks (meaning an oval on it’s side horizontally, rather than a tall, narrow oval).

I have also found that having extreme angles or sharp curves in a pattern doesn’t work with rag dolls. You want to mostly stick with gentle curves. Sharp curves can create puckering on the finished doll, and can make it look funny. There are methods that can help with avoiding some puckering, however, and we will discuss this when sewing our dolls.

In first drawing the pattern, I free-hand draw on a piece of white paper. I start with the head piece; all other pattern pieces I will draw to fit this head piece. This is not going to be perfect at first. It’s important to initially get your idea down on paper. Then you might get a ruler out to make straight edges straight (such as where head and body meet), or a plate or something else round to make your curved edges less bumpy.

I draw the face right on the pattern piece to see where I want to place things. How big do I want the eyes? Do I want them close together, or far apart? Do I want to make them round, almond shaped, or some other shape? Do I want to add eyelashes, eye brows, freckles or other facial features? I am partial to embroidering the features of the face, but there are of course other options: buttons for eyes or noses, or even hand drawn faces on the fabric using colored permanent marker or other marker. It all depends on the style you are going for.

Once I have a face and head that I like, I will cut it out with scissors. Then I fold it in half from cheek to cheek. I do this because I want my pattern to be symmetrical. This is important in making pattern pieces line up. I guess you could technically make an asymmetrical head if you wanted: if you’re purposefully going for that type of look for a zombie or monster doll or something. Anyway, once the piece is folded in half, I can see where edges might need to be trimmed to make both sides the same/symmetrical. An alternative to this is to originally draw only half your face on a folded piece of paper, so that when you cut it out, your head/face is automatically symmetrical.

Now I place this cut-out head piece on another piece of paper to draw a body piece. If you’ll notice on the pattern above, I have added ¼ inch on the bottom of the neck, and ¼ inch on top of the body piece so that those can sew together nicely (i.e. I accounted for the seam allowance in drawing my pattern). I use the same process for the body piece: draw a shape I like, and make it symmetrical, remembering that the finished piece will be at least ¼ inch smaller on all sides (even smaller when stuffed).

Now I draw arms and legs in shapes I like.

Technically you only need one arm and one leg pattern piece each since you want them symmetrical. Now here you have a decision: do you want to sew your doll together with the legs and arms already stuffed (in which you will leave the end of your arm and leg piece open where they join with the body), or do you want to stuff the arms and legs after the doll is sewn together (i.e. you’ll have to leave a section on length of each arm and leg open—when you sew it—to stuff after and then hand sew shut). There are pros and cons to each:

The pattern that I have been making in this tutorial is made with the intention of pre-stuffing the arms and legs. When first making rag dolls, I was partial to stuffing the arms and legs after the doll was assembled, but have moved to pre-stuffing the arms and legs. I also leave an opening in the back body piece of the doll where I stuff (this means my back pattern piece—you can see it pictured in the giraffe pattern—is two pieces that I sew together with a ¼ inch seam allowance, and leave 3 inches un-sewn in which to pull the doll right side out and stuff from the back). When I made my dolls in the method of not stuffing arms and legs first, I left an opening on the seam in between the legs of the doll in which to turn the doll right side out, and to stuff (see the rag doll picture). That meant that the legs had to be far enough apart to leave a space to turn the doll and stuff it, which affects your design of your doll. By placing the opening in which to turn and stuff on the back body pattern piece, I can make the opening to stuff the doll larger and I can place the legs of the doll close together if I want (like I did with the giraffe).  So this affects whether or not you mark a place to leave open on your pattern pieces for the arm and leg.

Also, I draw my arm and leg pieces without a seam allowance. What?! Why would I do such a thing? I guess technically you still could (i.e. draw the shape you want and then add ¼ inch all the way around it), but when I trace the pattern on my fabric (using pencil or disappearing ink), I sew directly onto the line I have drawn (because the fabric is folded over on itself so I am sewing two layers together to create one arm or leg). After I sew directly on the lines, I cut the sewn piece out around the sewn line usually with pinking shears. But you can do it either way. I just like seeing the line I am sewing on directly because it helps me sew more accurately, making the arms and legs look better.

So there are the basics of making your pattern. Make other pattern pieces as appropriate (i.e. ears). Here is the finished simple doll pattern we made today:

Of course, there is a time and place for making your own pattern and adjusting it, and sometimes you want a pattern that has already been tested and the problems have already been solved. If that’s the case, you can always find cute patterns online for purchase, or some are free. If you like the giraffe in this post, I will post a link to the pattern here (in my etsy shop) when the pattern is available.

I hope this has been helpful! We didn't address the issue of adding hair to a doll here, but if anyone wants that, I can post a tutorial later on putting yarn hair on a rag doll (like in the rag doll pictured above).

Upcoming post: a tutorial on putting the giraffe/rag doll together! (with lots of pics) 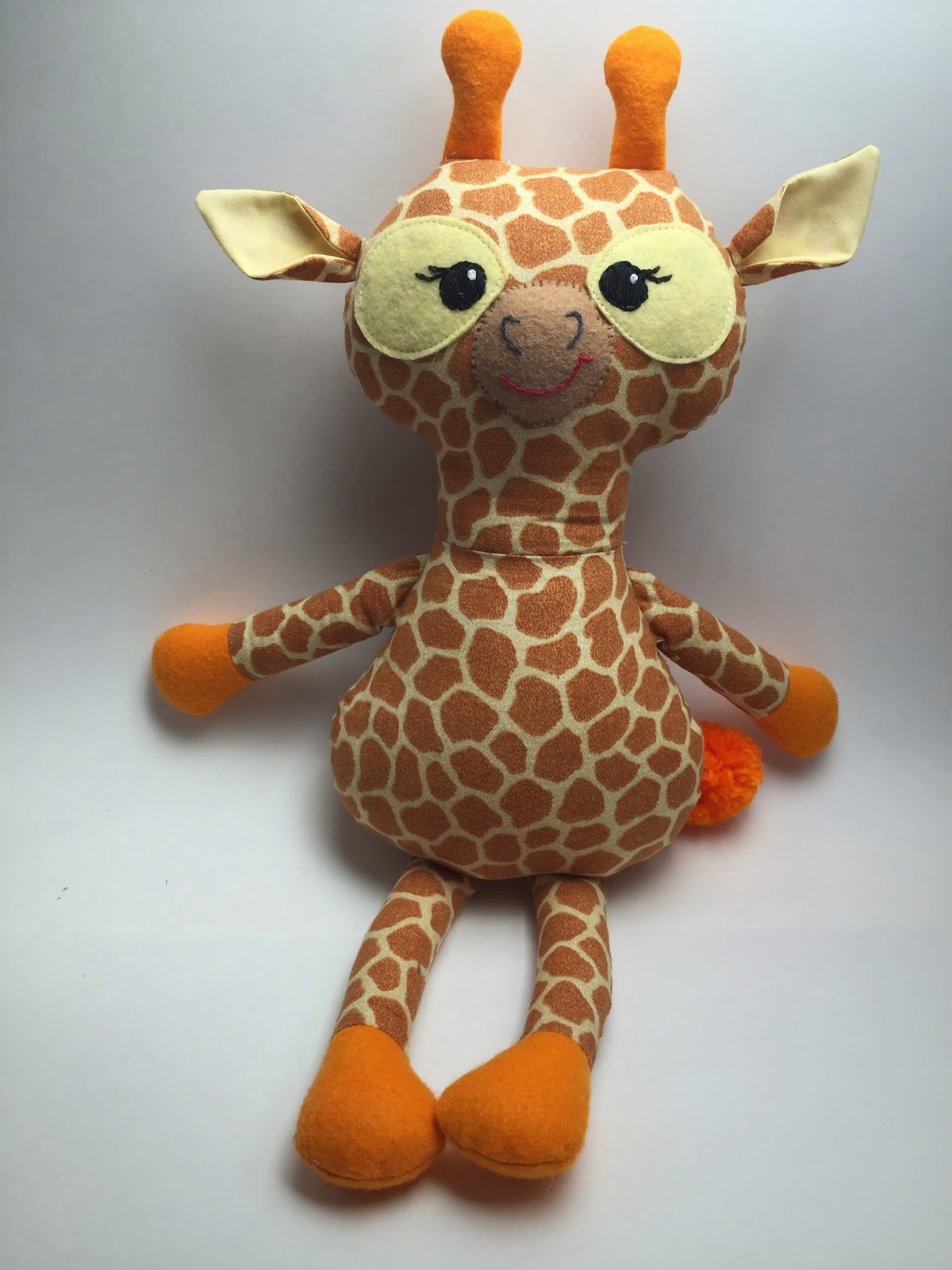 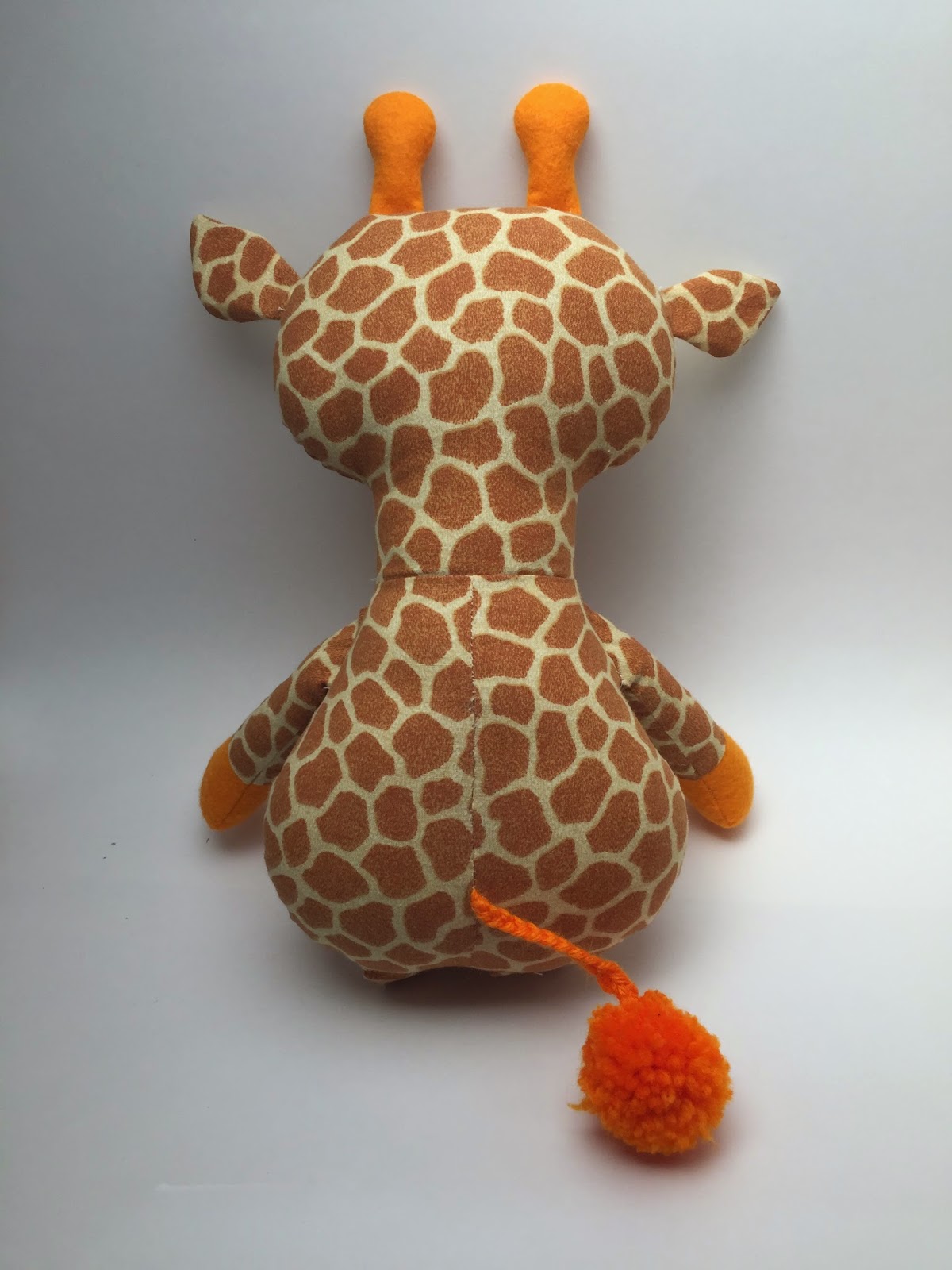 Posted by AHappyCarrot at 12:17 PM